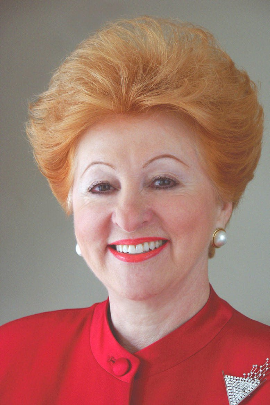 Susanne M Reyto, an award-winning author, speaker, world traveler and an ardent supporter of Israel and the free world.

She is a child survivor of the Holocaust and grew up under Communism. Her childhood experiences and her ultimate escape from Communist Hungary in the late 1950's left Susanne with an unwavering spirit of optimism and perseverance. She grew up in Australia, lived on Guam while her husband served in the US Navy and has traveled the world.

She is an active member of several organizations, past Chairman of the Board of Governors of City of Hope, American Freedom Alliance and board member of Beverly Hills Women's Club. She served as president of Hadassah Los Angeles and ZOA Western Region. She is a frequent speaker at Los Angeles Museum of the Holocaust. She works tirelessly for the preservation of our American way of life, liberty and the education of our future generations about history including the Holocaust.

Her writings have been featured in major US newspapers and Internet magazines/websites. She has appeared on television and radio in the US and Canada. Her book, "Pursuit of Freedom" has been designated as recommended reading for youngsters.

She owned and operated a prominent travel agency with an international clientele and for many years has specialized in art group tours throughout the United States and the world.

Her life today is balanced between family, business, philanthropy and cultural activities. Susanne is married, has one daughter and two grandchildren.